The Carlisle Indian Industrial School at Carlisle, Pennsylvania was established in 1879 and was closed in 1918. It was the first Government operated nonreservation boarding school for Indians. An outstanding feature of the school was the "outing" system, which permitted students to live and work outside the school and to attend public school while still enrolled at Carlisle. Although there are now in the National Archives more records of the Carlisle School than of any other Indian school, these records are very incomplete. There is very little correspondence, and there are serious gaps in other records. Most of the records relate to individual students and these are very incomplete also. Since the school made some attempt to keep track of students after they left the school, the records may include information concerning a former student up to the time the school was closed. The school's records now in the National Archives were transferred to the central office of the Bureau of Indian Affairs when the school was closed; and some additions were made to these records while they were in the custody of the Bureau.

Information about the image: "Sioux boys as they were dressed on arrival at the Carlisle Indian School, Pennsylvania." Photographed by J. N. Choate, October 5, 1879. American Indian Select List number 152. 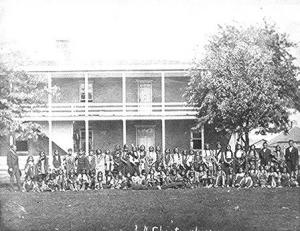