This collection contains a series of letters received by Dr. Cornelius Rea Agnew, a noted surgeon from New York City who was a strong supporter of, and significant donor to, the Carlisle Indian Industrial School. The majority of the letters were written by Richard Henry Pratt, and discuss a number of topics including donations to the school, renovations and purchases for the campus, Pratt’s attempts to gain further support and funding from politicians in Washington, and various trips undertaken by the two for the benefit of the school. One letter, from Acting Secretary of the Department of the Interior M. S. Juslyn, discusses approval for funding for one of Agnew’s trips to the American West, and two letters from Amy A. Carothers, an early teacher at the school, discuss activities in her classroom. 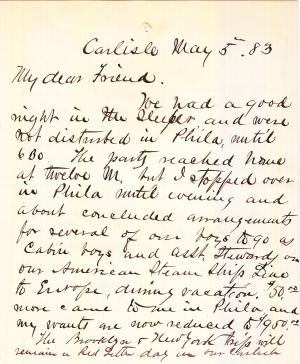