Student file of Hattie Sawatis (Ahkatkaeonvanamwia), a member of the Mohawk Nation, who entered the school on October 30, 1906.  No departure information is given.  The file contains a progress/conduct card, an outing , an outing evaluation, an application for enrollment, and a medical/physical record.  The file indicates Sawatis was originally from Hogansburg, New York and went on two outings while at Carlisle. 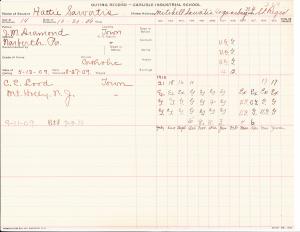